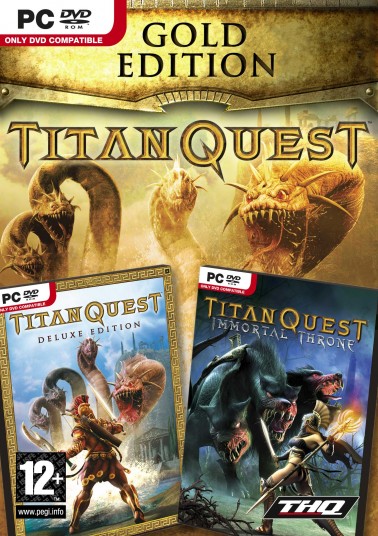 The Titans, gods before the gods, have escaped from their eternal prison to wreak havoc on the world. In this titanic struggle between old and new gods, it is the heroes of humankind who will ultimately determine the fate of all existence. Quest throughout the ancient world in a race to uncover the secrets needed to one again imprison these ancient gods.

From the co-creator of Age of Empires Brian Sullivan comes an all-new action role-playing game set in the mythical worlds of ancient Greece Egypt and China. Amazing visuals and fast-action gameplay deliver a true cinematic gaming experience. Lush ancient world settings crafted in near-photo realistic detail provide the player with an extraordinary canvas on which to set forth on an epic quest of the ultimate good versus evil.

With Titan Quest: Immortal Throne continue the epic story and battle through the sinister underworld of Hades. Along with new foes players will find new allies. Players will interpret the prophecies of the blind seer Tiresias fight alongside Agamemnon and Achilles and use the wiles of Odysseus to conquer this dark new adventure. Streaming seamless world Over a thousand pieces of unique and legendary equipment Immortal Throne features 10 Additional Character Levels allows players to bring existing and new characters to new heights along with higher level equipment and skills. The expansion pack features an entirely new skill mastery which combines with existing skill masteries to create eight new exciting character classes Quest through exotic locations in the Mediterranean area and ultimately descend across the river Styx into the heart of Hades. Defeat terrifying new monsters on your way to victory!