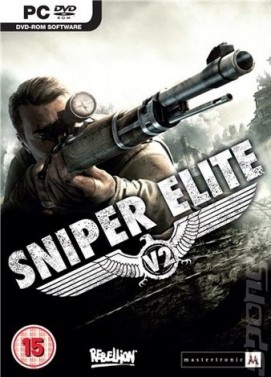 In the dark days of the end of World War Two amidst the ruins of Berlin, one bullet can change history…

Sniper Elite V2 is an award-winning and authentic World War II sniping experience. You are elite US sniper Karl Fairburne. Parachuted into Berlin amidst the Germans’ final stand, your mission is to prevent Nazi V2 rocket program technology from falling into the hands of the besieging Red Army. You must aid key scientists keen to defect to the US, and terminate those who would help the Russians.

Take advantage of authentic weaponry, learn how to stalk your targets, fortify your position, set up the shot, use your skill, patience and cunning to achieve your mission. Stealth gameplay is the key as you find yourself trapped between two desperate armies in a race against time.

Watch as the celebrated ‘bullet cam’ from Sniper Elite returns, bloodier and more gruesome than ever – skilful shots are rewarded with a slow-motion flight of the bullet, then targets are graphically rendered in X-Ray as the bullet enters and destroys your victim. Organs shred, bones splinter, teeth shatter, as the true impact of the sniper’s bullet is brought to life.

As World War Two ends and the Cold War begins, every shot counts. Use it wisely.

Since its release, Sniper Elite V2 has been continually supported by Rebellion, adding new features and content – including an additional 10 free multiplayer maps.