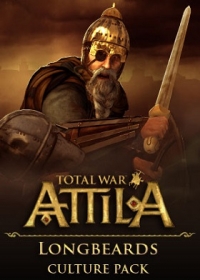 The Longbeards Culture Pack brings three new playable factions to Total War™: ATTILA. The Langobards, the Burgundians and the Alamans may be used in Single or Multiplayer Campaign modes and Custom and Multiplayer battles.

After centuries facing the threat of Roman dominance, these three formidable and warlike Germanic kingdoms are ready at last to sweep forth in expansionist campaigns from their tribal homelands. The Western Roman Empire lies to the South, her border territories weak and ripe for the plunder. With their unique blend of new buildings, battlefield units and faction traits, The Longbeards are poised to exploit the chaos of the age.

In history, these factions would go on to found some of the great empires of the medieval period. Will you marshal their might to forge those empires yourself?

Unique narrative event-chain: The Lay Of Ybor
Playing as these factions will present you with a new series of linked narrative events. The Lay Of Ybor is delivered in the style of a Germanic Saga, in which you direct the actions of a fabled hero through a series of branching narrative choices. As the story draws to its conclusion, Ybor himself becomes available as a general for your armies, complete with traits that mirror the choices you made.

The Burgundians: Bred For The Hunt
Icy Determination: +10% unit replenishment
Harsh Sustenance: +15 food for every region with poor fertility

The langobards: Godan’s Chosen
Emancipators: Number of men recruited from defeated enemy forces is doubled.
The Fury of Our Maker’s Hand: +10% unit morale when fighting armies of other religions.

Unique mission objectives
Players waging a campaign with the Langobards, Burgundians or Alamans will receive a unique series of mission objectives over the course of the campaign. Among these is a new optional objective which offers you a substantial injection of wealth to abandon your settlements and become a true migratory faction.

Unique units
Complementing the Germanic barbarian unit roster, The Burgundians, Langobards and Alamans each have access to a number of unique units in battle.

New Ancillaries
The Longbeards Culture pack features several new ancillaries with which to bolster the skills and abilities of your campaign’s key characters: