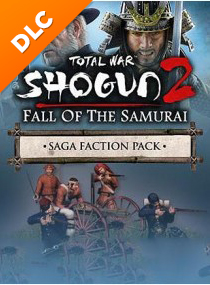 The Saga Faction Pack adds a new playable faction to Total War: SHOGUN 2 – Fall of the Samurai, previously only available in the Limited Edition, for use in single or multiplayer Campaign modes and Custom and Multiplayer Battles. Centuries of trade with outsiders has given the people of Saga an understanding of foreign and modern ways, allowing them to adopt new military technology quickly.