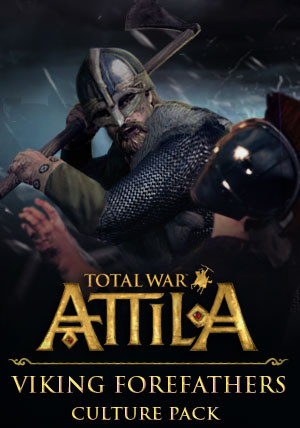 The Viking Forefathers Culture Pack adds The Norsemen as a new playable culture to Total War™: ATTILA. These factions may be used in Single or Multiplayer Campaign modes and Custom and Multiplayer battles.

With the Viking Forefathers at their command, players can marshal the forces of The Geats, The Jutes and The Danes as they launch southwards from their icy homelands on campaigns of looting, raiding and conquest. In the bitter, windswept north, hard winters breed hard men, and Norse warriors are redoubtable in combat on land and sea. To these natural seafarers and expert coastal raiders, the plentiful lands to the south promise glorious victories and great plunder!

Unique Faction Traits
All Norse factions bear a unique trait which further defines their strengths and play-style in the Grand Campaign.

Unique units
Each of the three Norse factions can recruit two unique units in battle:

Geats
Thrall Spears
Plentiful and Inexpensive, Thrall Spears can form a defensive backbone for any army.

Thrall Spearmen
Thrall Spearmen represent a solid anvil for the enemy to spend his cavalry against, and can pack a deadly punch on the charge with their javelins.

Jutes
Huscarls
The fearless Huscarls hurl themselves into battle, carving a gory path through the enemy ranks with their axes.

Danes
The seagoing Danes may recruit the fearsome Drekkar Dragonship manned with two extra varieties of troop options. These rugged warships can withstand much punishment before delivering some of the Viking Forefathers’ most powerful and vicious melee warriors – the Chosen Norse Marauders and the Elite Norse Marauders – into the fray.

Viking Forefathers unit rosters
Alongside elements from the Barbarian battlefield unit roster, The Geats, the Jutes and the Danes can field specific Norse units in battle on land and sea.