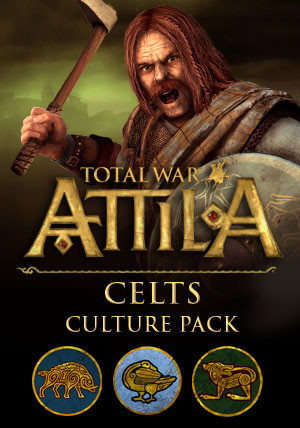 The Celts Culture Pack brings three new playable factions to Total War™: ATTILA. The Picts, the Caledonians and the Ebdanians may be used in Single or Multiplayer Campaign modes and Custom and Multiplayer battles.

As the grasp of Western Rome weakens on the Britannic isles, these fierce tribes stand ready to proclaim their independence and reclaim their ancestral lands. But even as the empire recedes, others are setting their sights on The Tin Islands. The warlords of Germania and the Nordic regions look to the northwest and see a prize worth fighting for…

Cultural traits (Celts)
Specialising in ambush tactics, all units in the Celtic faction rosters have the Guerrilla Deployment trait. This enables them to deploy every unit in their army almost anywhere on the battlefield – even behind enemy lines. As specialists, Celtic nations should not be expected to perform as all-rounders; an experienced commander will play to their strengths with deadly effect.

Befitting their skilful application of these traits, sacking, looting and raiding are key sources of income for the Celts and this is reflected in many aspects of their gameplay style and the additional bonuses they receive.

Ebdanians
Alongside the common Celtic traits for raiding, the Ebdanians also have a talent for sacking and looting that combined gives them a unique playstyle and unrivalled potential for profiting bloodily at their enemies’ expense.

Picts
As ‘Children of the Night’, the Picts rightfully earn their reputation as skilled nocturnal combatants at land and sea, and may always choose to attack at night. With bonuses to morale in the dark, and a reliance on heavy assault and berserker units, an ambushing Pict army is the literal stuff of nightmares.

Caledonians
Silver-tongued, wily and deadly in the arts of sabotage and assassination, the Caledonians breed individuals of incredible charm, menace and murderous skill. All Agents from this faction are eager to step forward for duty, more efficient in their assigned tasks and far more likely to succeed.

Unique narrative event-chain: Cycle of The Ollam Ri
Playing as these factions will present you with a new series of linked narrative events. The Cycle of The Ollam Ri draws much inspiration from Celtic mythology, and sees you direct the actions of a fabled hero through a series of branching narrative choices. As the tale draws to its conclusion, Ollam Ri himself becomes available as a general for your armies, imbued with traits that mirror the choices you made.

New Mechanic: Prestige Buildings
The Celts Culture Pack introduces three new Tier 5 buildings, unlocked through a new game mechanic. The Bards’ Hall, the Temple of Belenus and the Central Market confer significant bonuses, and alongside the necessary technological requirements, these buildings require the player to meet specific gameplay conditions in the form of great feats in the fields of religion, trade and warfare.