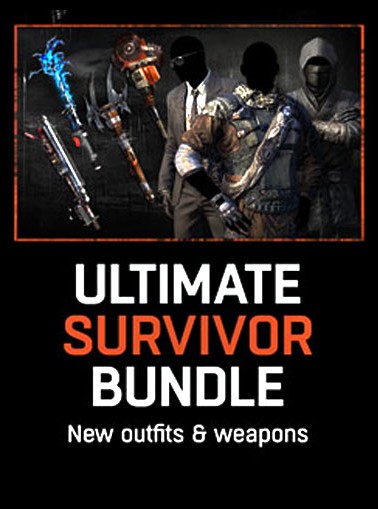 Ultimate Survivor Bundle
Suit up your survivor with the best gear and weapons in Harran by turning him into the Ninja, the Secret Agent, or the Urban Explorer. Craft four extremely powerful tools of destruction and bring fighting the Infected to a completely new level. Grab all these bonus in-game items in one go.

Buzz Killer Weapon Pack
Sledgehammer with barbed wire around the head and working buzz saws attached on each of its ends. Especially effective against big, armored enemies as it cuts easily through their plating. If you had trouble fighting the Demolishers, the Buzz Killer will now make short work of them.

Night Club Weapon Pack
Steel pipe coupled with a glow tube protected by a metal casing. At night the tube flickers giving scant illumination. But every time you land a critical hit, the tube produces a short but painfully bright flash that blinds all enemies in range, making their execution a mere formality.

The Lacerator Weapon Pack
An improvised weapon resembling a rake but definitely much more lethal. Its long sturdy shaft is crowned with a head of six shredded blades that cut deep into enemy flesh. With the Lacerator, you can make broad swings that will painfully wound multiple targets at once!

The Constable Weapon Pack
The Constable is a tough police baton wrapped in electrified barbed wire. As if that wasn’t enough, it’s tipped with a spiked head that generates plasma-like discharges – electrocuting those who dare come too close.

Ninja Outfit
Don a mask of a Japanese assassin and blend into the shadows of the quarantine zone.

Urban Explorer Outfit
Get ready to dive deep into the city jungle with a protective vest, knee pads, and sturdy boots.

Special Agent Outfit
Dress in style and elegance as you dismember zombies in fountains of blood.